A new emergency shelter for homeless families that opens Tuesday in Anaheim aims to reduce the amount of time families spend on the streets by using a triage strategy modeled after emergency hospital rooms. Pathways of Hope will provide immediate care and then sort out what specific programs people need.

Up to 13 families facing immediate homelessness can stay in a one or two bedroom, furnished apartment for up to 30 days in a remodeled 10-unit complex run by Pathways.

“It’s a safe and stable place for them to assess their options with our staff and find the solution that will end their homelessness the quickest,” said housing and community engagement manager Michael Shepherd. 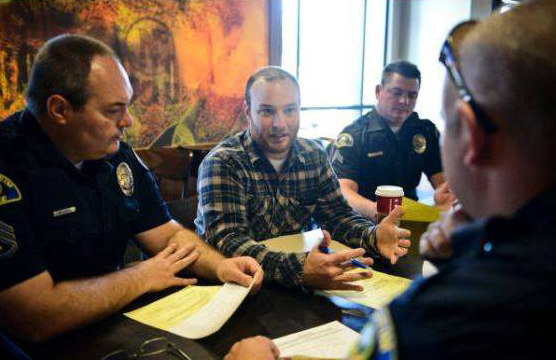 Shepherd said there won’t be a long pre-interview process or wait-list for homeless parents with at least one child, under age 18.

There are several homeless shelters and housing assistance programs in Orange County aimed at families, but many do not operate like a true emergency shelter.

They may, for example, serve women with children only, which makes it difficult for fathers to stay with their family or single dads with kids. They might focus on domestic violence victims, or won’t accept teenage boys because of liability risks, said Shepherd.

Others shelters ask families to enroll in a long-term housing program, with job or personal finance counseling services, which can take time to process and be a barrier to those who only need is a place to stay short-term.

“What we’ve seen in the last few years is that not everybody needs those intensive services,” said Shepherd. “Some people just need a few days to reconnect with family to see where they can move in.”

Instead of “homeless shelter,” Shepherd employs a little marketing by calling the program, a “housing program,” in order to connect with those who don’t see themselves as being homeless, or transient.

Homeless shelters where single adults – often, single men – sleep can seem unsafe for a parent with small children who may resort to sleeping in a car instead.

Pathways of Hope works hard every day to support people who are struggling with food insecurity or facing the crisis of homelessness.

If you would like to help our most vulnerable neighbors in North Orange County, please consider making a donation today.

***All donations made in the month of December are MATCHED dollar for dollar up to $15,000 by the Wilson W. Phelps Foundation!***