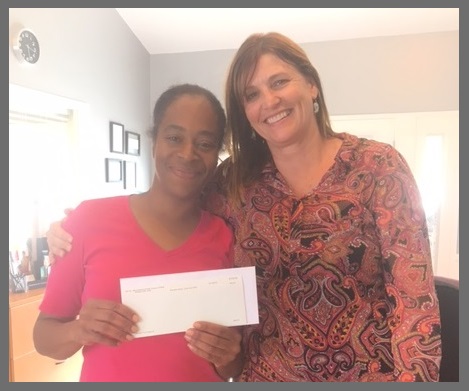 Pictured Above: Rianna with a Pathways of Hope staff member after signing the lease for her new apartment.

Rianna’s 7 year old son was struggling with ADHD. His behavioral issues became such a challenge that Rianna lost her job after having to leave work to pick him up from school so many times. When she lost her job, she was unable to afford her rent, and the two became homeless. Determined to keep a roof over her son’s head, Rianna made arrangements to stay with family friends. She and her son slept on the couch and on the floor, but this living situation was untenable.

Rianna says, “I prayed for God to provide.” Then she found Pathways of Hope. Pathways was able to help Rianna find a new home of her own, and provided assistance with her security deposit through our Rapid Re-housing program. Rianna says, “Pathways of Hope is a blessing,” and she is so thankful for the assistance she received. Rianna’s son has been prescribed new medication and his condition has stabilized. Now that he and his mother have a home of their own again, and thanks to his new medication, Rianna’s son is doing much better in school.

All it takes is one unexpected crisis to cause a family to become homeless. Helping homeless families like Rianna’s is only possible thanks to the support of our generous donors like you.

You can rebuild the lives of those in need by donating to Pathways of Hope. Your donation will help support people like Rianna and her son, people who are facing an economic crisis and seeking support from Pathways of Hope, an organization that has spent over forty years dedicated to ending hunger and homelessness in our community.